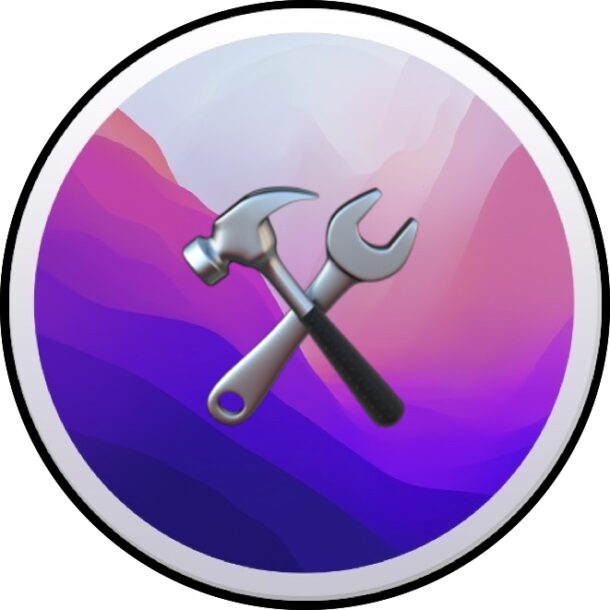 Difficulties with new system software versions seem to always occur for a small subset of unfortunate users, and MacOS Monterey is no different. While MacOS Monterey has installed fine for most users, for an unlikely group, there may be a variety of problems or issues experienced with MacOS Monterey.

This article will detail some of the problems and difficulties experienced with macOS Monterey, and when possible offer some solutions or fixes to the issues experienced. Be sure to share your own experiences in the comments as well.

MacOS Monterey Not Showing as Available, “Unable to Check for Updates” Error, etc

If MacOS Monterey is not showing as available to download in Software Update as expected, it may be because of several reasons, both of which are typically easy to determine and remedy. 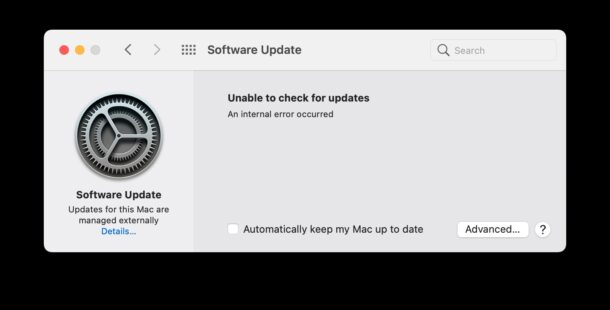 If you know you’re on a compatible Mac, and Software Update is still not showing Monterey as available, you can also find a direct download link for MacOS Monterey InstallAssisant.pkg here, which will place the full installer within your /Applications/ folder.

Some Mac users may feel that MacOS Monterey is running slower than a prior macOS release they had installed. This is fairly common after any major system software update, because after installing a new OS a variety of maintenance and indexing tasks are kicked off in the background to do things like rebuild the Spotlight search index and reindex photos.

If the Mac feels slow after updating to MacOS Monterey, the best thing you can do is simply leave the Mac turned on and wait. You can typically speed up the indexing process by leaving the Mac on and idle with the screen off, perhaps overnight. Performance should recover within a day or two, depending on the amount of data to index.

Wi-Fi Dropping or Not Working as Expected with MacOS Monterey

Wi-fi issues seem to happen with some regularity to a subset of users with any system software update. From wi-fi dropping connections, to slow speeds, to other wi-fi abnormalities, all manner of wi-fi problems can crop up for some users after updating system software.

Fortunately wi-fi problems are typically one of the simplest issues to resolve, and often simply trashing current wi-fi preferences, rebooting, and then rejoining a wi-fi network is enough to resolve the problem.

Some users have found that MacOS Monterey drops bluetooth connections for some devices.

Sometimes simply disconnecting and then reconnecting the Bluetooth Device from the Mac will resolve the problem.

Also, be sure the batteries on the Bluetooth devices are fully charged, or if they’re swappable are fresh. Often Bluetooth randomly disconnects due to batteries being low, so charging the batteries of the device that is problematic is a simple solution.

If all else fails, you can often fix Bluetooth errors by trashing the preferences.

Typically these sort of issues can be resolved by dumping the current installer, rebooting the Mac, and then redownloading the full macOS Monterey installer either from System Preferences, the App Store, or by direct download of the InstallAssistant.pkg file.

Some users may see an error stating “An error occurred while preparing the installation. Try running this application again.” If you see this error, try redownloading the installer and running it again. Note however if the Mac is using a third party non-Apple SSD, that particular error message may persist until a firmware update has been able to install with an official Apple SSD, more on that in a moment.

Some Mac users who have replaced the built-in SSD drive on their Mac may find a peculiar “A required firmware update could not be installed” error message on the Mac running with a third party SSD.

There isn’t a great solution to this problem for the time being, but one solution is to replace the third party SSD with an Apple SSD again, install MacOS Monterey onto the Apple SSD, then replace the Apple SSD with the third party SSD again, and install MacOS Monterey onto there. This allows the firmware update to install onto the Mac, but it’s obviously a huge hassle because you have to physically swap out a hard drive several times.

Presumably this issue will be resolved in a future MacOS Monterey update.

Additional info can be found at the tinyapps blog.

Some Mac users running MacOS Monterey have discovered issues with runaway memory usage. This is not subtle if you are impacted by it, because you will receive a pop-up error informing you “Your System Has Run Out of Application Memory” and offering a Force Quit menu with memory usage shown to quit out of offending apps with.

In the most absurd examples, apps like Mail, Pages, Final Cut, Brave, or Firefox are consuming 80GB of memory (in the form of swap), rendering the Mac and the application basically useless and nonfunctional. Sometimes system apps and tasks are running into this issue as well, like Control Center, FaceTime, or Notifications. 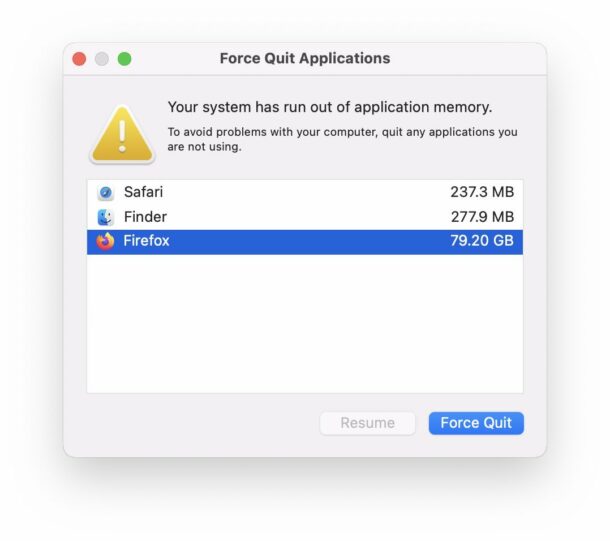 The only solution to this is to quit out of the memory hogging app, then rebooting. The “system out of memory” error may appear again after some time, in which case again quitting and rebooting is the temporary solution.

Alternatively, you could try using a different app with the same functionality, for example using Safari instead of Firefox.

This is obviously some type of bug that will certainly be resolved in a future macOS Monterey update, and perhaps updates to individual apps as well.

This is a rare but serious problem; some Mac users have discovered that installing MacOS Monterey renders their Mac completely useless. If you are impacted by this, the MacOS Monterey update does not succeed, and the Mac eventually boots to a black screen that does not progress further. A forced reboot does nothing. A future boot leads to nothing but a black screen. Attempting to reboot into Safe Mode or Recovery Mode also does not work (if it does, simply reinstalling macOS through Recovery should resolve the problem).

We first received reports of this bricking Mac problem on the day that macOS Monterey was released, but assumed they were a fluke. Since then, the reports have been more frequent, and more covered in other Apple resources online, suggesting the issue is more widespread than a rare fluke.

It’s not entirely clear what the issue is with this, but it’s presumed to be a failure of a firmware update during the MacOS Monterey installation.

Unfortunately there is no known fix or resolution to this issue, except for contacting Apple Support and having them start a repair.

At least one report online suggested that restoring an Apple Silicon Mac in DFU mode by using another Mac resolved the issue, but that process is extensive and rather advanced as covered here for Apple Silicon and here for Intel, requiring two modern Macs.

This is obviously a bug or some other issue with the MacOS Monterey installer, and will certainly be resolved in a future update.

Though this problem is not common, it is also not so exceptionally rare that it should be discounted entirely. If your Mac is mission critical, you may want to hold off on updating to MacOS Monterey until this particular issue is resolved.

Some Mac users discovered that some USB-C hubs stop working after updating to MacOS Monterey, or they may work sporadically, frequently disconnecting, or only some of the USB-C hub ports are working.

Curiously, some users who are impacted by this find that switching USB-C cables, using a shorter USB-C cable, or changing ports on the Mac can resolve the issue.

The “A required firmware update could not be installed” update is typically associated with using a Mac that was upgraded with a third party SSD, or on a Mac where MacOS Monterey is attempted to install on an external SSD.

Variations of this error may phrase different error messages, like:

“Compatible internal storage is required in order to update.”

“An error occurred while preparing the installation. Try running this application again.”

“A required firmware update could not be installed.”